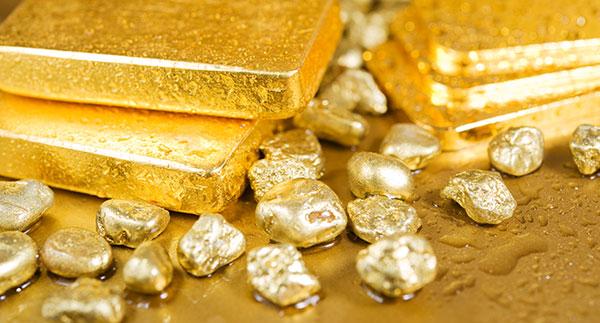 Gold may be off its 52-week highs, but the precious metal is still up more than 15 percent for the year through September 17. This appears to put gold on a path for its best year since 2010, when it gained just under 30 percent.

Buying the dips in gold right now could turn out to be a wise investment decision. There’s a lot happening at the moment – from an unprecedented $17 trillion in negative-yielding bonds worldwide to heightened geopolitical threats – that might boost investors’ appetite for the metal, which has a history of holding its value in times of crisis.

#1 U.S. inflation is finally starting to heat up

When President Donald Trump took office in January 2017, many market watchers expected consumer prices to climb rather quickly due to his protectionist policies and general skepticism of free trade agreements. Except for a blip here and there, inflation has remained pretty steady, even after hefty tariffs were imposed on goods imported from China.

That may be set to change, though, if the August inflation reading is any indication. “Core” consumer prices – which exclude volatile food and energy prices – rose to an 11-year high of 2.4 percent growth year on year. Not since September 2008 have prices expanded so fast.

Also of note: August saw the biggest monthly rise in medical care costs since 2016 as well as record increases in health insurance prices.

And remember, this doesn’t include the effects of the 15 tariffs on $112 billion in Chinese goods that the U.S. imposed on September 1. 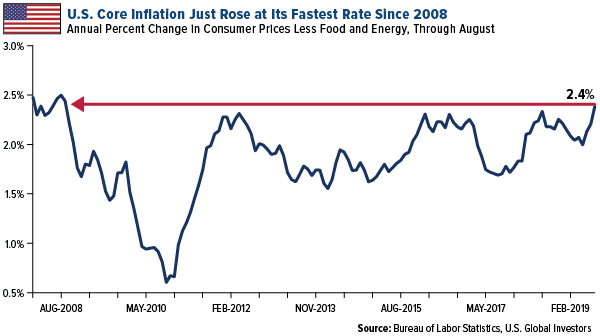 In the past, faster inflation has been constructive for gold prices. That’s because inflation, by its nature, destroys your purchasing power, and to limit these losses, investors have traditionally turned to the yellow metal as well as gold mining stocks.

So if you believe inflation is prepared to surge even more, it might make sense to add gold to your portfolio.

As much as $17 trillion in debt around the world right now trades at a negative yield. This has recently pushed the price of gold to new all-time highs in a number of currencies, including the British pound, Japanese yen and Canadian and Australian dollars.

So far we haven’t seen the negative-yield phenomenon in the U.S., at least not nominally. But it could only be a matter of time before U.S. fixed-income yields turn subzero, especially if Trump gets his way.

The Federal Reserve has been under immense pressure to drop rates to a level that, in Trump’s eyes, is more competitive with those in Europe, Japan and elsewhere.

“The Federal Reserve should get our interest rates down to ZERO, or less, and we should then start to refinance our debt,” Trump tweeted on September 11. “The USA should always be paying the lowest rate.”

I’m writing this a day before the Fed is widely expected to trim rates for the second time this year, and many analysts now believe as many as two more cuts could happen in 2019. Should U.S. rates drop to “ZERO, or less,” to quote Trump, then I believe Treasury bonds and investment-grade corporate debt would lose their appeal as stores of value, and gold would be a direct beneficiary.

And if you’re doubtful that negative yields could possibly occur in the U.S., consider the recent words of Alan Greenspan, former Fed chairman: “There is no barrier for U.S. Treasury yields going below zero. Zero has no meaning, besides being a certain level.”

If you believe U.S. yields could soon break below this “barrier,” then gold might be a prudent investment decision.

There are a number of geopolitical and economic risks right now that have triggered gold’s “fear trade.” Economic growth is slowing worldwide as a result of trade tensions. Global factories, as measured by the JPMorgan Global Manufacturing PMI, have been in contraction mode for two straight months as of August.

Investors in the U.K. and elsewhere have turned to gold as the October 31 deadline for Brexit looms ever closer. With it looking more and more likely that the U.K. will leave the European Union without a deal, the price of gold in pound sterling rose to an all-time high of 1,282 on September 3, an increase of more than 27 percent for the year. 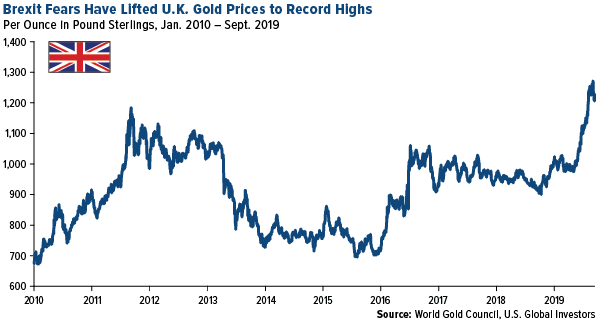 Such concerns also help explain why global central banks have been net buyers of the yellow metal since 2010. The Netherlands’ central bank recently explained why it continues to hold gold:

“Shares, bonds and other securities are not without risk, and prices can go down… If the system collapses, the gold stocks can help serve as a basis to build it up again. Gold historically bolsters confidence in the stability of the central bank’s balance sheet and creates a sense of security.”

Disclosure: I/we have no positions in any stocks mentioned, and no plans to initiate any positions within the next 72 hours. I wrote this article myself, and it expresses my own opinions. I am not receiving compensation for it. I have no business relationship with any company whose stock is mentioned in this article.

Additional disclosure: All opinions expressed and data provided are subject to change without notice. Some of these opinions may not be appropriate to every investor.

The Consumer Price Index (CPI) is one of the most widely recognized price measures for tracking the price of a market basket of goods and services purchased by individuals. The weights of components are based on consumer spending patterns. The JPMorgan Global Manufacturing PMI is compiled by IHS Markit, based on the results of surveys covering over 13,500 purchasing executives in over 40 countries. Together these countries account for an estimated 98% of global manufacturing output.

Coronavirus, US data in focus

Oil jumps more than 2% on reports of effective coronavirus drug