With Brexit one month away and no deal in place, Forex markets face greater volatility, reports Adam Button.

Euro tumbles below 1.09 amid softer than expected German CPI. Global indices are recovering from Friday’s late session selloff after the US denied claims it was exploring steps to block U.S. equity listing of Chinese companies.

Weekend comments from Northern Ireland’s Democratic Unionist Party (DUP) hinted at progress on Brexit as Boris Johnson faces the defining moment of his political career. The Canadian dollar (CAD) was the top performer last week while the British pound lagged. Loonie outperformance came at the same time as CAD-longs were racing to the exits, according to Commodity Futures Trading Commission’s (CFTC) Commitments of Traders (COT) positioning data below.

Since the start of the Asia Monday session, all currencies are down against The U.S. Dollar with the exception of GBP. 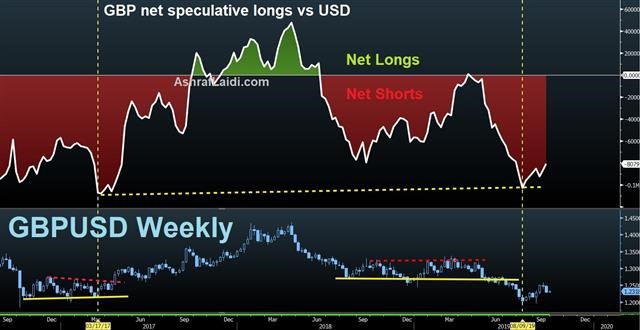 The ebb and flow of Brexit news has completely dominated GBP trading this year. Stepping back, it’s left semi-permanent investment gaps in the UK and has resulted in a re-rating of all UK assets, including the currency. The longer it lasts, the larger the risk that there is a structural impairment of the UK economy.

Currently, the bigger question is whether there is a political impairment of the country. Prime Minister Johnson has held steadfast in promises to take the UK out of the EU on Oct. 31 despite a deep divide in his party. One glimmer of hope came on Sunday from DUP Leader Arlene Foster who said there has to be a willingness at flexibility and creativity to find a solution to the Northern Irish backstop. If the DUP can be convinced of supporting a deal, it would bring many members of parliament on board.

As for the broader deal, Michael Gove on Sunday said it would have to be substantially different from the deal Theresa May presented earlier this year. That’s a tall order given the tight deadline. He also alluded to the prospect of the EU having to negotiate with yet-another Prime Minister; a subtle hint at his aspirations for the 10 Downing Street Game of Thrones.

Elsewhere, note that Monday is the only trading day this week in China. The market is closed through the weekend for holidays. That could bring calm to markets, but festivities will include many speeches from top policymakers and the topic of US-China trade relations is sure to come up.

Speculative net futures trader positions as of the close on Tuesday. Net short denoted by – long by +.

EUR -61K vs -69K prior GBP -81K vs -86K prior JPY +13K vs +24K prior CHF -11K vs -5K prior CAD +5K vs +20K prior AUD -47K vs -54K prior NZD -36K vs -30K prior
The erosion in oil prices following the Saudi spike and the looming election uncertainty chased out Canadian dollar longs. In terms of overall moves, the dollar bid strengthened modestly but there was no genuine theme. That underscores the broad wait-and-see theme in markets.

Adam Button is co-owner and managing director of ForexLive.com and a contributor at AshrafLaidi.com. You can see Ashraf’s daily analysis at www.AshrafLaidi.com and sign up for the Premium Insights. Ashraf’s Tweet on indices here.