14 Iowans living far from home showed up at the University of Pennsylvania to participate in one of the first satellite caucus events.

A personal finance website founded by University of Delaware students with startup money from the school is facing a hefty federal settlement for offering higher rankings and ratings to companies that paid for placement.

The website, LendEDU, displayed itself as a source of objective information, allowing visitors to compare financial products from dozens of providers in one place.

But according to a Federal Trade Commission complaint released Monday, the company steered its users toward lenders and creditors that paid them. The complaint also says the company wrote false flattering reviews of its own service on third-party websites. 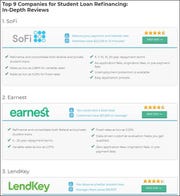 LendEDU has agreed to settle the allegations for $350,000, according to an FTC press release. The proposed settlement prohibits the company and its operators from misrepresenting its service again.

Named in the complaint are the website’s chief operators: Nate Matherson, Matt Lenhard and Alex Coleman. Matherson and Lenhard launched the company in 2014 while they were students at the University of Delaware, with money won at the school’s annual startup competition.

“LendEDU told consumers that its financial product rankings were based on objective and unbiased information about the quality of the product being offered, but in fact LendEDU sold its rankings to the highest bidder,” said Andrew Smith, director of the bureau of consumer protection. “These misrepresentations undermine consumer trust and we will hold lead generators like LendEDU accountable for their false promises of objectivity.”

WILMINGTON BUSINESS: A NJ insurance company plans to be the latest to invest in Wilmington. Here’s where

The FTC complaint sheds further doubt on LendEDU’s integrity. In April 2019, The Chronicle of Higher Education revealed that the company created a pseudonym, Drew Cloud, under which it made blog posts on a separate site and conducted media interviews.

The site, The Student Loan Report, appeared to be an independent news outlet covering student loans. It did not disclose its affiliation to LendEDU, which displays student loan refinancing options among its offerings.

LendEDU, which is based in Hoboken, New Jersey, did not respond to a request for comment.

LendEDU got its start through the Horn Program in Entrepreneurship at the University of Delaware. An FTC complaint has shed doubt on its integrity. (Photo: Suchat Pederson, The News Journal-USA TODAY NETWORK)

As business students at the University of Delaware, Matherson and Lenhard founded a company called “ShopTutors,” with the idea of creating a platform to connect students with tutors.

In its first year, ShopTutors won UD’s Hen Hatch startup funding competition, which came along with a $5,100 prize.

Matherson and Lenhard used the money to join a business accelerator program in Cedar Rapids, Iowa, where they transformed the company into LendEDU, then a marketplace allowing students to submit student loan and refinancing applications to multiple companies at once.

In an October article published by UD’s news service, UDaily, Matherson said by the end of 2015 the company grew so much that it started bringing in more UD grads, including Coleman. More than three quarters of the 14-person LendEDU staff are UD alumni, according to the article.

After Matherson and Lenhard graduated from UD in 2016 the business expanded, making seven-figure revenues while offering information about credit cards, insurance and banking products, in addition to loans.

In September, UD recognized LendEDU as one of the fastest-growing companies led by UD students or alumni.

The LendEDU website as it appeared on Feb. 4. LendEDU has agreed to pay $350,000 to settle FTC allegations. The company was founded by two University of Delaware students. (Photo: Brandon Holveck/Delaware News Journal)

According to the FTC complaint, LendEDU falsely claimed its website provided “objective,” “accurate,” and “unbiased” information about financial products, including credit cards, student and personal loans, and insurance and banking products.

The complaint does not specify a time period over which this occurred.

The FTC determined that most reviews on LendEDU’s website and third-party websites were made up by LendEDU employees, their family or friends, or others with personal or professional relationships with LendEDU.

On trustpilot.com, a review platform open to all, 90 percent of LendEDU’s 126 reviews were five-star reviews given by employees, family, friends or other associates, according to the FTC. The website now lists LendEDU as under investigation. 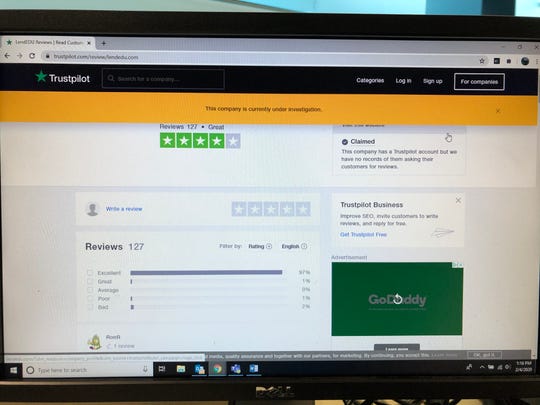 Trustpilot.com, an open review platform, has placed LendEDU under investigation. An FTC complaint said 90% of the company’s reviews were written by employees or their friends, family and associates. (Photo: Brandon Holveck/Delaware News Journal)

Above posts detailing LendEDU’s editorial integrity, its partners, and how it makes money the company claims it “does not receive direction from advertisers” and its research, news, assessments and ratings are “scrutinized using strict editorial integrity.”

The posts disclosing how the company makes money and its partners were published on Jan. 30 and Jan. 28.

After The Chronicle reported on Drew Cloud, the supposed student debt expert, Matherson wrote a post on the Student Loan Report explaining the company’s thought process.

“As we prepared to launch The Student Loan Report, we debated who should author it, and felt that it was really a blend of our personal experiences and perspectives that would create the best source material, so we created a pen name of ‘Drew Cloud,’ and conceived a background that we felt personified a lot of the perseverance we hoped to inspire with The Student Loan Report,” Matherson wrote.

The LendEDU team used a picture of a friend from UD to “round out the pen name.”

Multiple outlets including the Washington Post, the Boston Globe and CNBC cited Cloud in their reporting. A CNBC story described an exchange in which Cloud avoided a phone interview and only responded to questions via email.

According to The Chronicle, Cloud often suggested services offered by LendEDU.

In his post, Matherson insisted the information and stories published under Drew Cloud were accurate and derived from real experiences of LendEDU employees. He acknowledged they should have made clear who authored each post and that the Student Loan Report was affiliated with LendEDU.

“We started LendEDU to offer transparency in the student loan market,” Matherson wrote on the website’s editorial integrity page. “Today, we are working to provide transparency to the personal finance industry as a whole.”

FIRE Movement—What Is The Fire Movement? All About ‘Financial Independence Retire Early’